Bruce Banner is a character created for Marvel Comics by Stan Lee and Jack Kirby in 1962. Banner is the human alter ego of The Hulk. He is a renowned physicist who subjected himself to a gamma radiation experiment, which unleashes an alter-ego when his anger takes control.

In the comics, his girlfriend Betty Ross is seemingly the only person able to calm the Hulk back into Banner. He is often being pursued by his nemesis Thunderbolt Ross, who is Betty's Father. Bruce is often on the run while trying to find a cure for his problem and keep calm as much as he can while at the same time battling super-villains.

Evolution of Banner's Transformations into the HulkEdit

Stan Lee gave the Hulk's alter ego the alliterative name "Bruce Banner" because he found he had less difficulty remembering alliterative names. The Hulk was initially grey, but coloring problems led to the creature being made green. Bruce rushed to aid the young man, and in pushing Rick into a trench, exposed himself to the rays of the gamma bomb. The result of this exposure would be to transform gentle Bruce Banner into the destructive monster known as The Incredible Hulk. In the comics, the fictionalized color of gamma radiation is green, so when Bruce Banner turns into the Hulk, his increased blood pressure is over-charging the radiation in his body, causing the energy to practically come out of his pores, turning his skin green. Scientist Bruce Banner’s life has been an arduous one from the day he was first exposed to gamma radiation to becoming the larger-than-life behemoth known as the Hulk. Over the years, the Hulk, a manifestation of different aspects of Bruce Banner’s persona, has taken on different forms, from rampaging beast to cunning grappler to measured scientist, with many more iterations making themselves known.

Dr. Derenik Zadian is giving an evening lecture at Oxford University. He tells the youths gathered that they were selected because they are the best and the brightest. However, he cautions them that there is a difference between being brilliant and being funded. He asks them if they want to be theoreticians being debated by professors after their deaths or do they want to be applying their ideas and changing the world in the present. Among the students attending this lecture are Tony Stark and Bruce Banner.

Nazis developed advanced technology, conquered Earth. Decades later, Captain America of Earth-616 awoke within reviving body of his Earth-31117 counterpart, rallied underground movement to overthrow the Nazis. Cap awakes in a vastly different new world in 1964. Nazi Germany has won World War II and also conquered America. The Red Skull is the new Fuhrer of the Reich. Nazis, not the Avengers, retrieve Steve Rogers from the Atlantic and ferry him to the Skull in New Berlin. The Skull offers Cap a place n his new regime complete with lucrative compensation. However, Cap refuses and jumps from the window of a high rise building to escape the Red Skull and his minions. Cap and the Alternate World heroes defeat the Skull. In the final battle with the Red Skull, Steve Rogers is transported by Victor Von Doom's time machine back to the waters of the North Atlantic in 1964, to be recovered by the Avengers in our timeline. When trying to recreate Captain America's super soldier serum by using gamma rays, Banner was overexposed to the radiation, but rather than being killed by the gamma rays, he was instead mutated into the "strongest one there is", The (Incredible) Hulk. Steve (Steven Rogers) was present during a meeting in which Invisible Woman informed S.H.I.E.L.D. about the Infinity Gems she had been gathering along Thor, and the moment in which the mysterious Kang freed both Hulk and Reed Richards from the Triskelion, stole the Gems and formed along them and Quicksilver the Dark Ultimates. The Ultimates barely escaped, but Captain America decided to be left behind in order to stop the villains, although he was defeated. Dr. Bruce Banner was one of the most important American scientists employed in the rediscovery of the serum used to create the supersoldier, Captain America. Insecure and neurotic, in the hope of obtaining faster results, he tried an experimental version of the serum on himself, becoming Hulk; in this state, he devastated the port and killed more than 800 civilians before being stopped by the Ultimates.

In the universe Ultimate Pete Wisdom, a former member of the British intelligence service, after offering himself as a guinea pig for a program aimed at replicating Tony Stark's intelligence with Banner's DNA, becomes the Ultimate version of the Chief and, to keep under control his transformation, he tries to steal Stark nanotechnology but he is killed by Hulk.

The Cold War was the continuing state of political conflict following World War Hulk. Throughout the comics, the Hulk is constantly pursued by the United States military, but they cannot control him or defeat him. The essays span from the first Hulk comic book in through 's World War Hulk storyline. There are influences from The Cold War in the Hulk comics.

While in a fantasy world where Bruce killed the Hulk and the smart heroes joined the smart villains in a machine to help the world and where General Thunderbolt Ross is still alive, Bruce is visited by Doctor Doom who gives him a robot arm. Bruce Banner leaves a video for the heroes telling them how he planned all of these and to allow Skaar to kill him besides saving the civilians. Bruce then transforms into Hulk, fully controlling it, and goes back to Washington to battle Red Hulk. Banner's battle with Red Hulk gets them to the Intelligencia who manage to escape as their battle continues. Later, Banner and Captain Steve Rogers locks Red Hulk up and makes it clear that given his strength is second to that of the Hulk and his exceptional tactical expertise, they have plans for him.

The Hulk and Spider-Man: Murdermoon (1979)Edit

The book begins with the Hulk fighting the US military in a desert but then cuts to Spider-Man intervening in a raid on a company doing research for NASA. That story takes Parker out to a US aircraft carrier. Meanwhile, Banner is reading a newspaper advertisement offering a potential treatment for his condition. He follows up on the ad but finds himself kidnapped by the villain and gets brainwashed to fight Spider-Man.

When Captain America attacks Black Widow with her shield, she catches it and tosses it at the Hulk, decapitating him from behind. However, from the time period Hulk was, his body suffered mutations that allowed his survival, by growing an additional head. Black Widow tries to perform the same move from before, but the Hulk is not caught off-guard like the last time, so he easily catches the shield and throws it back at a speed at which Black Widow can't catch, splitting her head in half.

Bruce Banner is "cured" from the Hulk as he had been lobotomized and no longer has access to the emotional centers of his brain, thus he can't get angry and transform. During one fight, Wasp's device which controlled the Hulk was destroyed, causing him to revert to his human form. Banner joins the team in Avengers Vol. 5 #28. "Bruce Banner had already left the battle after the Wasp (Janet van Dyne), lost control over him and he turned back to his human form. After Wasp attempted to surrender, Hulk arrived and reignited the fight". This might be possible because this Wasp had a device which allowed her to control the Hulk.

Immortal Hulk is the result of Bruce Banner and Hulk having been through different deaths and rebirths. Unlike the other Hulk incarnations, Immortal Hulk is content with waiting inside Bruce. If Bruce is injured by sunset, the Immortal Hulk will emerge with his transformation being limited to night-time. Bruce Banner’s death at the height of Civil War II and his return for a new ongoing series has sparked a dark road for the Hulk to go down, as Bruce finds an altogether smarter and crueler Hulk sharing his body. But it’s a problem that is starting to affect more than just Bruce.

For much of his comic book history, the ability to transform into the Hulk was more of a curse than a superpower for Bruce Banner. He is more Jekyll and Hyde than he is Clark Kent and Superman.

Elsewhere in the park, Janis recovers from the Wild Man's attack and is discovered by another gamma-spawned being who remembers her, but that she died in Maestro's future. When Janis asks who this new comer is, he tells her that he is the Hulk. (Incredible Hulk #450). Seemingly those of Earth-616's Hulk. He also seemed to have healing powers, as he healed a black eye he gave to Hulk (though this is debatable due to Hulk's healing factor). Janis Jones (deceased).

Meanwhile, lacking the guidance of a role model who taught him the value of responsibility as a result of Benjamin Parker's death, Peter Parker grows up to become a disaffected, trouble-making punk. At one point, Peter decides to sneak out of a field trip to a desert base and goes joyriding with friends in a stolen jeep. After the jeep breaks down, Peter goes off to find fuel, but accidentally wanders into a test site just as a gamma bomb is detonated. Soon after recovering from the explosion and returning home, Peter is confronted by the two friends, who accuse him of getting them into trouble. Peter becomes angry and turns into Hulk, destroying property around him. The Hulk is confronted by the police. Aunt May recognizes the Hulk as Peter and suffers a heart attack, which causes him to flee in distress.

The Marvel Mangaverse is a series of comic books published by Marvel Comics from 2000 to 2002, with a sequel "New Mangaverse" released in late 2005 and early 2006. By 2005, Official Handbook to the Marvel Universe: Alternate Universes 2005 has given the numerical designation of "Marvel Mangaverse" as "Earth-2301". Bruce Banner, the Incredible Hulk, is considered by many to be the strongest hero on the face of the planet. Yet with every popular character there emerge alternate versions and iterations of said character: Zombie Hulk, Apes Hulk, Maestro, Hulk 2099, Old Man Logan Hulk, Aboriginal Hulk, Infernal Hulk, Nerd Hulk, Venom-Hulk, Tyrone Cash, Captain Universe Hulk, Skulk, Kluh, Ultimate Hulk and Lizard-Hulk. 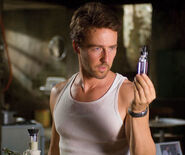 Edward Norton in The Incredible Hulk (2008)

Mark Ruffalo in the Avengers movies (and Thor: Ragnarok) (since 2012)
Add a photo to this gallery
Retrieved from "https://hulk.fandom.com/wiki/Bruce_Banner?oldid=15782"
Community content is available under CC-BY-SA unless otherwise noted.