Fantastic Fortitude is episode eight of the animated TV series The Incredible Hulk. It originally aired on November 10, 1996 on UPN.

Arriving in New York City, Bruce thinks the scientific expertise of Reed Richards can cure both him and She-Hulk – not that she is too keen on that idea. However, most of the Fantastic Four just left for vacation and only Ben Grimm – who is upset over his recent breakup with Alicia – is still in town. On the way to a supposed publicity stunt at the zoo, Ben runs into Rick. All parties meet at the zoo, as the Ogress attacks. Hulk eventually escapes with Rick – leaving Ben with a smitten She-Hulk. experiments of the Leader?

Hulk and She-Hulk have their reunion in NYC

She Hulk says goodbye to her cousin Hulk 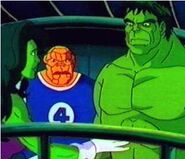 Retrieved from "https://hulk.fandom.com/wiki/Fantastic_Fortitude?oldid=15053"
Community content is available under CC-BY-SA unless otherwise noted.