Fashion Warriors is episode eighteen of the 1996 animated series The Incredible Hulk. It originally aired on November 2, 1997 on Fox Kids.

A fashion show is going to be held in a Miami skyscraper and all of the proceeds will be going to charity. One of the invited models is She-Hulk, who jumps at the chance to take part. Unfortunately, there won't be much time for fashion fun. The Leader is back – bringing Gargoyle, Abomination and Ogress along for the ride. Green Hulk puts up a fight, but is ultimately captured. Saving him and defeating the Leader fall to She-Hulk, Betty and three models.

She-Hulk and Betty Ross form an impromptu all-female super hero team with three other models in the fashion show, Mariah, Ristie and Jade: The Fashion Warriors.

Lou Ferrigno is mentioned by name and an animated version of him appears on the red carpet at the Fashion Show. Several other voice actors can also be recognized, including Cree Summer, Luke Perry and briefly Matt Frewer, Mark Hamill and Kathy Ireland, though none of them have any lines.

Fashion Warriors on a Mission 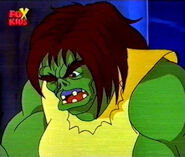 Retrieved from "https://hulk.fandom.com/wiki/Fashion_Warriors?oldid=17769"
Community content is available under CC-BY-SA unless otherwise noted.