Yuri Topolov (Russian: Юрий Тополов) was a Soviet scientist and the first foe of the Hulk. Working with radiation at a Russian missile site had mutated him into a large-headed dwarf. Though his body was deformed, his mind was enhanced to a genius-level intellect.

Under the auspices of the Kremlin, Topolov have sent a Soviet spy named Igor Drenkov to the United States to steal the secrets of the Gamma Bomb. Though Igor was captured, he managed to transmit a message to the Gargoyle, informing him that the American's experiments with gamma radiation created a monstrous being known as the Hulk. Topolov then became obsessed with the Hulk and decided that he must either kill him or bring him back to Russia as a symbol of his power.

Boarding a rocket-firing submarine, the Gargoyle journeyed to the United States and sneaked into the American military base. Encountering the Hulk and Rick Jones, the Gargoyle incapacitated him with a gun designed to sap the will of an opponent. He brought the unconscious Hulk and Rick Jones back to Russia, but when they arrived, he discovered that the Hulk had reverted to his human form of Doctor Robert Bruce Banner. This revelation was devastating to the Gargoyle, who longed for nothing else than to look normal. Banner told him that he was familiar with cases like him, and that he could cure his deformity, though the treatment would also mean that the Gargoyle would lose his enhanced intellect.

Banner began treating and Topolov and succeeded in curing him of his condition. Topolov was so grateful that he turned against the Soviets and managed to destroy several Soviet generals by detonating the military base where he worked, enabling him to "die like a man." However, he passed his deformity on to his son, Gremlin.

A different version of the events surrounding the origin of the Hulk and the demise of the Gargoyle were presented in the "Rampaging Hulk" magazine series. This version was later revealed to be a fictional account created by the Alien documentary maker Bereet.

Although the original comic book version of the Gargoyle met his demise in the same issue that introduced him (The Incredible Hulk #1), the character became a recurring villain in the 1996 animated series.

Voiced by Mark Hamill, this version of the Gargoyle had grey skin and served as the right hand man to The Leader, albeit begrudingly. Gargoyle was especially annoyed by the Leader's catchphrase "So says the Leader". The reason he kept working with him was because he wanted to capture Bruce Banner in the hope that he would provide a way for the Gargoyle to transform back into his original human form, just like the Hulk was capable of doing. This version of the Gargoyle also developed a crush on the She-Hulk. 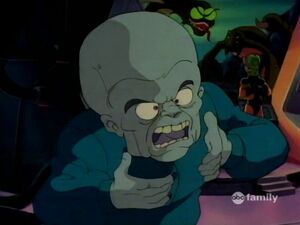 Retrieved from "https://hulk.fandom.com/wiki/Gargoyle?oldid=8822"
Community content is available under CC-BY-SA unless otherwise noted.