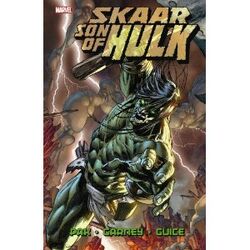 Born in fire. Raised by monsters. Destined to smash. On an alien planet shattered by war, no one is stronger than Skaar, the savage Son of Hulk. But as a Fillian warlord, an Imperial princess, and a mysterious Earthman spread chaos through the wastelands, will Skaar save the puny survivors -- or eat them?