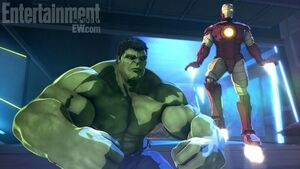 Marvel is pairing Iron Man and the Hulk in a post-Avengers film titled Iron Man & Hulk: Heroes United. In this animated feature, there will be a villain named Zzzax. It is a creature formed out of pure energy who can absorb human minds, and fans will be able to see the film when it makes its debut on home video April 23rd, 2013.

Add a photo to this gallery
Retrieved from "https://hulk.fandom.com/wiki/Iron_Man_%26_Hulk:_Heroes_United_(2013)?oldid=4899"
Community content is available under CC-BY-SA unless otherwise noted.