The following is a list of comic book incarnations of the alter ego of Bruce Banner.

"Joe Fixit" is a Grey Hulk (not the original) that worked for a time as a Las Vegas enforcer. The Grey Hulk has poor intelligence, although he occasionally displays knowledge and intellectual ability normally associated with Banner. He is cunning, crafty, hedonistic, arrogant, and distant, with a hidden conscience. In most of his Las Vegas orientated appearances, Joe Fixit appears only at night. According to the Leader, the Grey Hulk persona is strongest during the night of the new moon and weakest during the full moon. This aversion to sun/moonlight vanished when the Grey Hulk's night-induced transformation trigger was later removed. Although he is the smallest of the Hulks, the Grey Hulk towers over the average human but prefers to dress in tailored suits. His transformation gets triggered when the sun is going down, but Banner would only transform to Joe Fixit if Joe won the battle against Hulk (as seen in the '90s series).

Savage Hulk is the most common version of the Hulk, he possesses the mental progression, emotional capacity and emotional temperament of a young child, typically referring to himself in the third person. Despite being enraged, Hulk often claims that he simply wishes to be left alone. The Savage Hulk is usually depicted as green-skinned and heavily-muscled with a loping, ape-like gait. While in a functionally calm emotional state, or at least as calm as the Hulk can be, the Savage Hulk is capable of lifting in excess of 100 tons.

Nightmare, in an attempt to find new ways to hurt his enemy Doctor Strange by going through his friends, penetrated Bruce Banner's mind and discovered his influence had an unexpected side effect; a new personality began to develop out of Banner's worst visions of the Hulk. At this period in Banner's life, he had just gained control over the Hulk's body, but was constantly on alert and terrified this was just temporary, and that the Hulk, which he saw as nothing but a savage and destructive beast, would break free once more when the world least expected it. Far from being identical with the original Hulk, this version was based on a nightmarish imagination made of all of Banner's worst fears and ideas of his former alter ego.

Nightmare continued to manipulate and increase his influence, allowing this dark incarnation to gradually rise to the surface. It finally became its own personality after Banner made his "psychic suicide", allowing it to break free of Banner's domination. Eventually, with the assistance of Doctor Strange, entered the Dimension of Nightmare as a similar manifestation as Mindless Hulk, threatening to kill him.

Devil Hulk is the malevolent personality of Bruce Banner, personifying all of Banner's resentment at the way he is treated by the world. He is also one of the Hulk's enemies, constantly threatening to escape confinement in Banner's mind and destroy the world that has tormented and abused them, simultaneously leaving nothing intact that Banner holds dear. He first appeared when Banner was dying of Lou Gehrig's Disease, and Banner used a machine to travel into his own mind and make a deal with the three dominant Hulks that they would gain control of his body once the disease became too much for him to bear. The Devil Hulk was revealed at this point but escaped a short while afterward when the machinations of General Ryker shattered the barriers keeping the Devil Hulk imprisoned. Fortunately, he was contained long enough for a cure for Banner's condition to be found, before finally being contained in Banner's subconscious.

Immortal Hulk is the result of Bruce Banner and the Hulk having been through different deaths and rebirths, allowing the Devil Hulk to seal the other incarnations away and become the dominant Hulk persona.

Unlike the Merged Hulk, the Professor was physically distinguished by having a ponytail, which the Merged Hulk did not. Jenkins justified this by retconning into the Hulk's continuity a new character named Angela Lipscomb (modeled after Jenkins' own girlfriend) who knew more about Bruce Banner than even Doc Samson. Lipscomb confronted Samson with her observations of the Professor and Doc Samson validated them, despite events presented in previous issues to the contrary. The Professor is the largest of the three primary Hulk incarnations and he also possesses a higher base strength level. While in a calm emotional state, the Professor is capable of lifting in excess of 100 tons. However, unlike the other Hulk incarnations, Bruce Banner subconsciously installed a type of safeguard within the Professor. When the Professor's anger reaches a certain level, he will transform back into Bruce Banner, though with the mind and personality of the Savage Hulk. Due to this safeguard, the Professor is ultimately the weakest of the three primary Hulk incarnations despite being the physically largest. Professor Hulk has the attributes of three Hulks: Grey Hulk, Savage Hulk, and Banner. He is the weakest of all incantations because he will revert to Banner with Savage Hulk's mind if he gets too angry.

The Hulk of a possible future where nuclear devastation has eliminated many, if not all, Earthbound heroes and villains. Hulk was simply powered-up by these events. Thanks to the nuclear fallout, this Hulk’s strength had been drastically improved to the point where he could lift twice as much in a calm state as he could before. This highly ruthless and intelligent version of Hulk rules Dystopia. The Merged Hulk is contacted and brought to this future by the great-great-granddaughter of Rick Jones (who survives in this time, unnaturally aged and confined to Professor X's 'Nineties' era roller-chair) in an effort to put an end to the malevolent rule of his older self. The Maestro is similar in height and build to the Merged Hulk, with a bald crown, long white hair over the sides and back, and beard. With a slight hump of the shoulders from age, the Maestro also has a more muted green skin tone and numerous warts and age spots. It is unclear if this incarnation's strength increases with rage, or what his base-level strength is, though, presumably it is equal to that of the Merged Hulk, as the younger is easily defeated in hand-to-hand combat with the older (this could, however, be a question of experience, not brute strength). The Maestro is defeated when one of Dr. Doom's time platforms is used to transport him to the moment of Banner's initial accident with the Gamma bomb; Maestro is overloaded and incinerated by the very explosion that transforms Banner into the Hulk in the first place.

Known as "The Beast", the Guilt Hulk is another of Bruce Banner's personae, though this one created by his regret. The Guilt Hulk originally manifested itself in Banner's mind as his father and tormented him by forcing him to relive memories of his traumatic childhood. Eventually, the Guilt Hulk was defeated by Banner himself. The Guilt Hulk later returned after Betty's death, albeit much more powerful because of Banner's emotionally fractured state. After brutally beating the Professor and Joe Fixit, the Guilt Hulk was eventually subdued again by the Savage Hulk. Due to its monstrous size, the Guilt Hulk was physically very powerful. It also possessed claws and spikes all over its body. The Guilt Hulk also showed the ability to breathe fire on one occasion. Guilt is the largest of all incarnations, standing twenty meters tall.

A personality born from the need to survive the harsh planet of Sakaar. Has seemingly, though never officially confirmed, the intelligence of banner the cunning of the Grey Hulk and strength of the savage Hulk his base strength started at above human and grew to beyond 100 tons with no defined limit. Gladiators were armed slaves forced to fight each other for the amusement of the people of Sakaar. During the gladiator games, Hiroim realized that Hulk was fulfilling the prophecy of the Sakaarson. Hulk's victories proved popular with the populace, but disastrous for Red King.

A more powerful form of what is known as the Green Scar coming from his rage being at its most focused, due to meditation training by his ally Hiroim. The Hulk is seen at his maximum rage, due to the destruction of his adopted planet as depicted in the Planet Hulk series. Hence he is seen in his most powerful form. The Avengers and the Fantastic Four frequently allude to this in the World War Hulk series. This incarnation has extremely high durability, as evidenced by his ability to withstand an imposter Skrull Black Bolt's voice then later the repeated destruction of the Dark Dimension fighting an unbound Red She-Hulk. He also shows incredible stamina by fighting with most of the Heroes of the Earth and defeating them inside a week, including Avengers, Fantastic Four, and Sentry who was considered the most powerful of earth's heroes. However, he did receive help not only from his Warbound alliance with Alien Heroes but also from sympathizers of Hulk in the earth such as Amadeus Cho in all the cases but the Sentry. It's even implied from the fact Sentry passed out after both had reverted to their human state but Banner remained standing with glowing eyes and displayed an ability to transform back into Hulk after the fight shows that his full limit even then was untapped.

A personality that came into being due to a mix of factors including exposure to the upgraded Extremis virus. Very much similar to the Professor in terms of intelligence, style of dress and strength, though lacking scruples of most other forms have. Hates being called Banner or Hulk, suggesting he's a separate part of either of them. Saw a vision of the Maestro and grew a beard similar to him because of it, suggesting he'd be most likely the form to become him if allowed to continue. Attempted to depower all other Gamma Mutates friendly (She-Hulk, Skaar, A-Bomb) or foe (Leader) before losing himself after the effects of the diminishing Extremis. His control over the shared body of Bruce Banner was broken due to the lessening intelligence, but not before creating an AI duplicate of his personality, who turned against him once it figured out he was no longer as smart as when he made it.

Blue Hulk is the strongest version of Hulk in the cosmos. He has abilities of Bruce Banner from Earth-616

He comes from Earth-99062. This version of Hulk is strong and smart at the same time.

In the series Marvel Zombies, the Hulk has been infected with a virus which makes him into an undead zombie (he is actually infected by the zombie Fantastic Four). Although he still retains his strength and invulnerability, he no longer heals, is losing weight because of his now-deteriorating tissue, does not feel pain and now craves human flesh. The zombie Hulk's transformations are physically controlled purely by his appetite — after feeding, he transforms back into Banner, who is also a zombie, until the hunger returns. When Hulk first transforms back into Banner, his stomach starts to burst. He is directly responsible for killing the Silver Surfer by biting off his head. Later he joins Spider-Man, Iron-Man, Giant-Man, Wolverine and Luke Cage as the Galacti after killing and consuming Galactus. 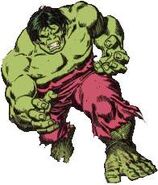 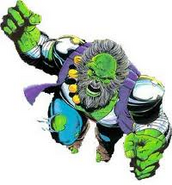 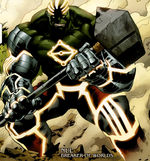 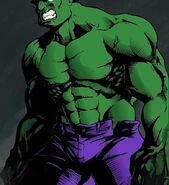 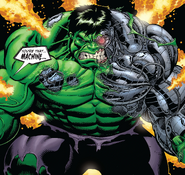 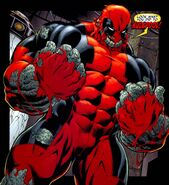 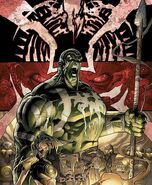 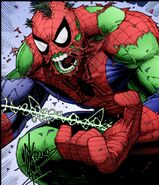 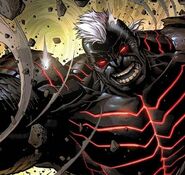 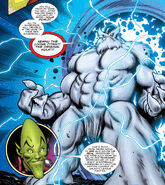 Xemnu a.k.a. The Living Titan or The Original Hulk 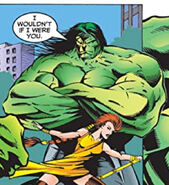 Weapon H a.k.a. The Hulkverine
Community content is available under CC-BY-SA unless otherwise noted.
Advertisement