Red Hulk is a Marvel Comics character, the alter ego of Thunderbolt Ross. His size is estimated to be the same as the green Hulk. He carries a S.H.I.E.L.D. gun around all times and uses it to sometimes finish off his victims like he did to A-Bomb.

We know that he either works for S.H.I.E.L.D or the army because he uses their gun and when he accidentally passed through an eye scan, the security robot says "Scan complete. Subjects I.D confirmed as..." Before he could say anymore, Rulk crushed him. At the end of Hulk: Red Hulk, Rick knew Rulk's identity. The only people that know his secret are Rick Jones and General Ross.

In the first comic called Red Hulk, he first appeared killing Abomination. Doc Samson and She Hulk was investigating the murder. he battled the Hulk twice. He won the first time but the Hulk used a tactic on him the second time. But Rulk was still not dead. Before he could get his name out, Doc Samson shot him and told him that he couldn't go around telling secrets. At the same time, General Ross was talking with Rulk.

It seemed that he was working with Rulk to kill the Hulk. And then later, it is found out that Ross was the Rulk.

Red Hulk is a mysterious creature that appeared first in Red Hulk: Round 1. A little girl was a witness, and she lived. She kept saying the word Kpacasi which means Red. (She was saying red because of Red Hulk's skin color.) The Red Hulk also has worked with Emil Blonsky, better known as Abomination multiple times in an attempt to kill Hulk.

Having all of the attempts fail, the Red Hulk had decided to shoot Blonsky and kill him, possibly because he had no use for him.

Red Hulk has also fought She-Hulk. He is also the father of the Red She-Hulk, Betty Ross.

He is a playable video game character. In reference to his being a military general, one of his attacks is to throw a military bomb at opponents with a military helmet.

Hulk and the agents of SMASH[]

In this version this character is not a villain. General Ross told his story of fighting the Hulk and mentioned becoming a Hulk. But it was never explained how he stopped being the Hulk's enemy. 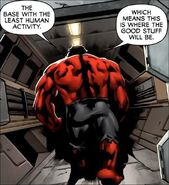 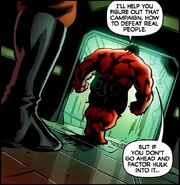 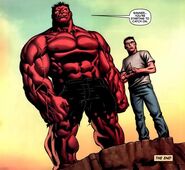 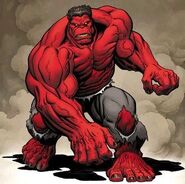 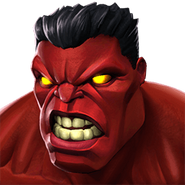 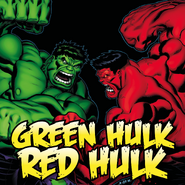