Stranger in a Strange Land is episode twenty in season one of the animated TV series Hulk and the Agents of S.M.A.S.H. It originally aired on March 30, 2014 on Disney XD.

To help the aspiring magician A-Bomb get a lesson in hard work, Hulk puts him under the tutelage of the Sorcerer Supreme, Doctor Strange. But when the dreaded Dormammu abducts his teacher, A-Bomb has to use what he learned to save Earth.

Strange soon falls, and he tells A-Bomb to use his spells against Dormammu to prevent his escape. After getting Dormammu caught in an infinite hallway, Rick whips out the mirror from earlier. 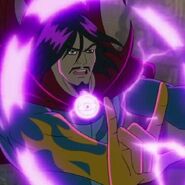 Retrieved from "https://hulk.fandom.com/wiki/Stranger_in_a_Strange_Land?oldid=13217"
Community content is available under CC-BY-SA unless otherwise noted.