The Avengers is a team that was created, or taken in, by S.H.I.E.L.D. The members of the Avengers are Bruce Banner/The Hulk, Captain America, Hawk Eye, Black Widow, Iron Man, and Thor Though this team might have their differences, they always come through in the end.

There have been multiple animated TV series, animated videos, and four blockbuster live-action films on the Avengers.

The Hulk became a pawn of Loki, who tricked the Hulk into battling his half-brother, Thor. This plot was foiled, leading to the Hulk, Thor, Iron Man, Ant-Man, and the Waspjoining forces to form the Avengers and defeat Loki. The Hulk was a founding member of the group and together they clashed with Doctor Doom. The group's mistrust in him became apparent when they were manipulated by the Space Phantom, and coupled with Mephisto in the form of a snake speaking lies to him, prompted the Hulk to quit. The Avengers began hunting down their unpredictable former ally. The Hulk found an ally in the Sub-Mariner, and clashed with the heroes, Thor in particular, but the Hulk was defeated and disappeared in the water.

The Hulk soon resurfaced in New York City seeking revenge against the Avengers, clashing with them as well as the Fantastic Four, leading to a rematch with the Thing. The battle ended with Hulk being swept away in the New York harbor. The Hulk resurfaced back in New Mexico, where he was tricked by the Avengers into aiding them in preventing the Lava Men's attempt to eradicate human life on Earth's surface.

While hiding out in a cave near Hollywood, the Hulk was disturbed when the Green Goblin's plot to use the Enforcers to kill Spider-Man encroached into his hiding spot, leading to a brief clash between the Hulk and Spider-Man before the Hulk fled the scene. Later, the Hulk was manipulated into battling his former Avengers comrades, Giant-Man and the Wasp, by their enemy, the Human Top. 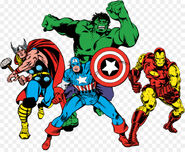 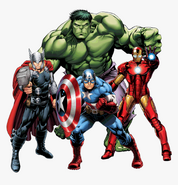