The Defiant Hulks is episode fourteen in season two of the animated TV series Hulk and the Agents of S.M.A.S.H. It originally aired on March 1, 2015 on Disney XD.

Hulk reluctantly fills in as Mayor of Vista Verde while Red and Skaar leave the team to start their own webcast as super villain bounty hunters – their first target: Abomination. 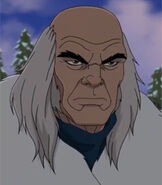 Retrieved from "https://hulk.fandom.com/wiki/The_Defiant_Hulks?oldid=13821"
Community content is available under CC-BY-SA unless otherwise noted.