The Incredible Hulk is the third video game in the Hulk series, coming after Hulk and Incredible Hulk: Ultimate Destruction. You have taken the role of either Hulk, or multiple character skins which you can unlock in the game. The Hulk will take on foes such as Kyklops, Abomination and the U-Foes. Bruce Banner is really just trying to obtain an antidote to his gamma radiation powered alias, The Hulk.

While at the city, you will meet Rick Jones, who you will have to help out quite a lot. While helping Rick, you shall also battle Kyklops, a gigantic robot with a large weakspot like eye. Before you obtain a cure, the U-Foes arrive and you have to battle them. One of the members include Ironclad. When the cure is made, Bruce travels to the lab where he turns into The Hulk, but has the antidote injected within him. It seems like it worked, although they are all not so sure if it had worked permanently or is just a one-timer. After Bruce is taken by Ross and the military, Emil Blonksy has taken the serum and turned himself into the Abomination. You have to fight Abomination in two areas. Onee area is on the streets, while the other area is on a rooftop. See this video for some reference about the fight. Below is the video you can see about the brawl.

The gameplay of the game is basically a free roaming game in New York City while you roam around, either looking for missions or just cause some kind of random destruction in New York. Any building, when damaged enough, will collapse. Destroy landmarks for landmark tokens. While around New York, you may also be attacked by the army is you continue to attack the city. They will send out troops, army vehicles like tanks and also robots. Edit

The Incredible Hulk also allows you to play as a different 'character', which is basically a skin. They include:

Hulk 'with' the bus 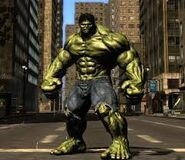 Hulk getting stepped on 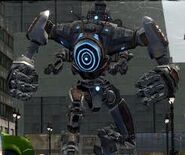 Kyklops. Can Ya Dig It? 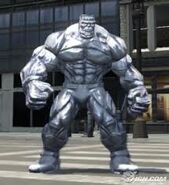 Can Abomination Win? see pic 8
Add a photo to this gallery

Retrieved from "https://hulk.fandom.com/wiki/The_Incredible_Hulk_(2008_video_game)?oldid=9793"
Community content is available under CC-BY-SA unless otherwise noted.