The Lost Village is episode seven in season two of the animated TV series The Incredible Hulk. It originally aired on November 16, 1997 on UPN.

Ninjas gang up on an old Chinese man, which Green Hulk is not happy about. The man shows his gratitude by giving him his special medallion. Amazingly, it gives Bruce full control of his transformations. The medallion came from the hidden Anavrin valley in Tibet – prompting a new journey for Bruce, Betty, and She-Hulk. That place may be the key to ending Bruce's days as the Hulk for good. Unfortunately, they are not the only ones searching for Anavrin. The deadly Scimitar and his team also seek to possess Anavrin's secrets, and they aren't ones to show restraint.

Scinitar: Weakling! Don't you ever defy me!
Bruce: You just pushed the wrong button, pal... [Turns into Green Hulk]
Green Hulk: Big time! [Punches Scimitar, to no effect]
Scimitar: You call that big, you lummox? This is big! [Punches Hulk out of the store]

As She Hulk shops in Tibet. Banner Shops around for the other half of the necklace

Bruce and Betty were on a date when Cyborg Henchmen attack

Hulk Changes Back into Banner

Banner Changes into Hulk. He and She-Hulk fights the Cyborg-Villian

Banner thinks that he may have finally found a cure in Tibet. Unfortunately, he is not the only one looking for it. 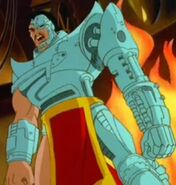 Retrieved from "https://hulk.fandom.com/wiki/The_Lost_Village?oldid=15402"
Community content is available under CC-BY-SA unless otherwise noted.