They Call Me Mr. Fixit is episode four in season two of the animated TV series The Incredible Hulk. It originally aired on October 26, 1997 on UPN.

Bruce Banner is hypnotized into helping a Chicago crime boss. The only way to help him is for She-Hulk to become a rival boss, and Grey Hulk becomes her muscle.

After a fight in Banner's mind. Grey Hulk wins and transforms 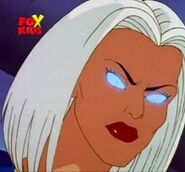 She Hulk still worrying about Bruce. Ask about the people who took him

Retrieved from "https://hulk.fandom.com/wiki/They_Call_Me_Mr._Fixit?oldid=17768"
Community content is available under CC-BY-SA unless otherwise noted.