Start a Wiki
Thor is a superhero that appears in comic books published by Marvel Comics. The character is based on the god Thor of Norse mythology. His first appearance was in Journey into Mystery #83 in August 1962.

Thor makes his first live-action appearance in the television film The Incredible Hulk Returns (1988). Thor was played by Eric Allan Kramer, and Donald Blake by Steve Levitt. In this version, Blake does not transform into Thor, but rather they were two separate individuals. The first time that Thor appears is when Blake calls him to appear, but Thor causes Banner to transform into the Hulk and they fight, but no one wins. Then he helps the Hulk.

Thor appears as the protagonist in the direct-to-video animated short film Hulk vs. Thor (2009), voiced by Matthew Wolf.

Stan Lee in 2002 described Thor's genesis early in the Marvel pantheon, following the creation of the Hulk:

"How do you make someone stronger than the strongest person? It finally came to me: Don't make him human — make him a god. I decided readers were already pretty familiar with the Greek and Roman gods. It might be fun to delve into the old Norse legends... Besides, I pictured Norse gods looking like Vikings of old, with the flowing beards, horned helmets, and battle clubs.  ...Journey into Mystery needed a shot in the arm, so I picked Thor ... to headline the book." 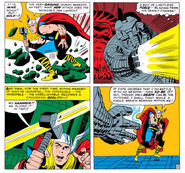 Add a photo to this gallery
Retrieved from "https://hulk.fandom.com/wiki/Thor?oldid=15257"
Community content is available under CC-BY-SA unless otherwise noted.