Wendigo Apocalypse is episode ten in season one of the animated TV series Hulk and the Agents of S.M.A.S.H. It originally aired on November 3, 2013 on Disney XD.

As the curse of the Wendigo begins spreading across the team. A-Bomb narrates this heroic episode turned horror flick joined by Marvel's biggest clawed Hero, Wolverine. Together, they must all stop the curse from spreading and do everything in their power to prevent from becoming Wendigos themselves.

Unfortunately, the Wendigos climb up the mountain and pile onto the tram. The team opens fire on stun as Rick begins to transform into a Wendigo and attacks Hulk. 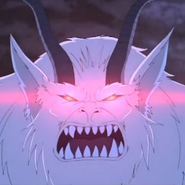 Retrieved from "https://hulk.fandom.com/wiki/Wendigo_Apocalypse?oldid=15660"
Community content is available under CC-BY-SA unless otherwise noted.