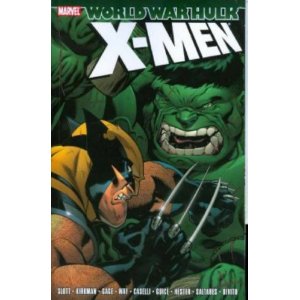 In Avengers: The Initiative, when the Hulk and his Warbound invade America, the Superhuman Armed Forces answer the call! Meanwhile, the Irredeemable Ant-Man is on the run, hiding from S.H.I.E.L.D. But now things have changed - the Hulk has come to town! Also, with Iron Man missing after his battle with the Hulk, S.H.I.E.L.D. is thrown into chaos!

In other corners of the Marvel U Johnny Blaze gets what he wanted. Temporarily setting aside his quest for the remaining avatars of Lucifer, he has forced the Ghost Rider into a confrontation with The Hulk in hopes of saving the innocent.

And it's an all-out action as the X-Men battle the Hulk in defense of Professor Xavier's dream! You've never seen a Hulk/Wolverine matchup this savage!

Retrieved from "https://hulk.fandom.com/wiki/World_War_Hulk:_Marvel_Universe?oldid=4863"
Community content is available under CC-BY-SA unless otherwise noted.